Highlights from the coming U-3 auction: René Magritte’s prints

These works were produced one year after his death in 1968, following the original designs by the artist himself. Magritte’s graphic production is rather small, making these lots particularly precious. Each of them has been numbered and presents the signature stamp from the artist’s atelier.

L’Art de Vivre (lot no. 128) employs similar stratagems. The subject was devised by Magritte in one of his paintings back in the 1940s. The print displays a male figure, dressed with an elegant suit. He is headless and a pink spherical shape appears to be fluctuating above his shoulders, bearing a small human face. The composition is absurd: while the human figure can be easily recognised, the fluctuating shape generates a disquieting aura, further emphasised by the contrast with the naturalistic mountain landscape in the background.
L’oeil (lot no. 126) is the last work featured in the catalogue. As in L’Art de Vivre, Magritte chooses the circular shape so as to draw the viewer’s attention to the centre of the image. In this case, the circle acts like a frame, using the black portions to define a clear cut. In this way, the image revolves around the green eye, which confronts the viewer directly. On the other hand, the character behind the picture is left anonymous. This creates a sense of mystery connecting the print to the other two works. Moreover, the focus on the eye and the circular form, maybe a reference to the moon, relates the piece to other relevant Surrealist works, such as Un Chien Andalou, the shocking 1929 film directed by Luis Bunuel and Salvador Dalì.
The three prints by Magritte display a minor but relevant side of his production. For this reason, the proposed lots are rather rare works, which allow collectors to get closer to a giant of Surrealist art for a special price. 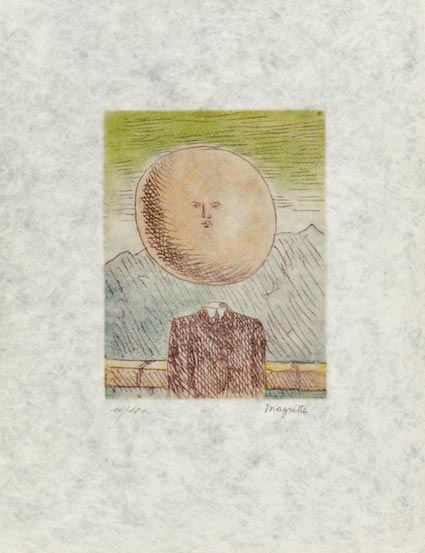 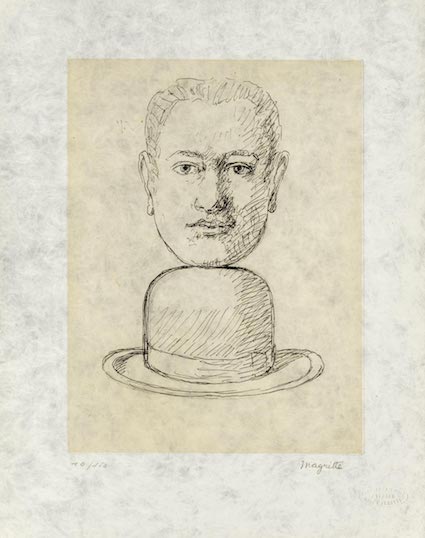