In the wake of the success of the last auction "4-U new” held on May 18th, that highlighted - among the most important results - the hard-fought bid of “Io sono", the provocative immaterial sculpture by Salvatore Garau, we are pleased to re-propose the extract of the artist’s interview carried out on April 16th 2021 and included in both the printed and online versions of the catalogue.

The “Invisible Sculptures”, what they are?

Rather than invisible sculptures, I would define them as immaterial sculptures. My fantasy, trained for a lifetime to feel differently the existing around me, allows me to ‘see’ what apparently does not exist.
The intangible sculptures are works that I feel as physical. Into the void there is a container of positive and negative possibilities that are constantly equivalent, in short, there is a density of events. Furthermore, the void is nothing more than a space full of energy, even if we empty it of electromagnetic fields, neutrinos, dark matter - in a way that nothing remains - it stands out that according to the Heisenberg uncertainty principle (which I recently read with enthusiasm) nothing has a weight! Therefore, it has an energy that condenses and turns into particles, in short, in us!
The abstract and spiritual intuition I had as an artist is then supported by science.
If I determine that in a given space I ‘exhibit’ an immaterial sculpture, that space will attract people's attention and thoughts. Then, I believe that the newly formed density of thought concentrated in a given space gives life to an agglomeration of elements that, sooner or later, I'm sure, science with new tools (who knows if they already exist) will decipher. Hundreds of thoughts focused on one point create a sculpture that will take the most varied forms from my title.
We do not see the thousands of information that surround us and feed our phones. Do we not shape a God we have never seen? A lot of people don't know they have a huge imagination! "

Could you tell us about the creative process that led you to conceive the “Absences”?

For a long time, I have been attracted to what is perceived not only with the eyes but with all the senses. Already in the black paintings of '84 and in the others later, black colour dissolved in a sort of ectoplasm, indefinite amoebic presences, so that I wanted to make visible thought of non-existent space.
Nowadays, the absence is the absolute protagonist of the times we are living through. It is with this “matter" - the absence - that I decided to create a series of intangible works. It seemed incredible and exciting to me to be able, with the title alone, to bring life works that do not require the consumption of materials, transports, permits, as the ‘Buddha in contemplation’ in Piazza della Scala. I made and positioned it without moving from my studio (for now in Sardinia). However, I did not create this work with anything, I created it with everything.
Thought is the first part of the work and I want to give the utmost importance to this phase. Of course, I continue to paint. Simply, the two strands - thought and realization - are sides of the same coin but while realization needs thought, this one can be independent of everything else. 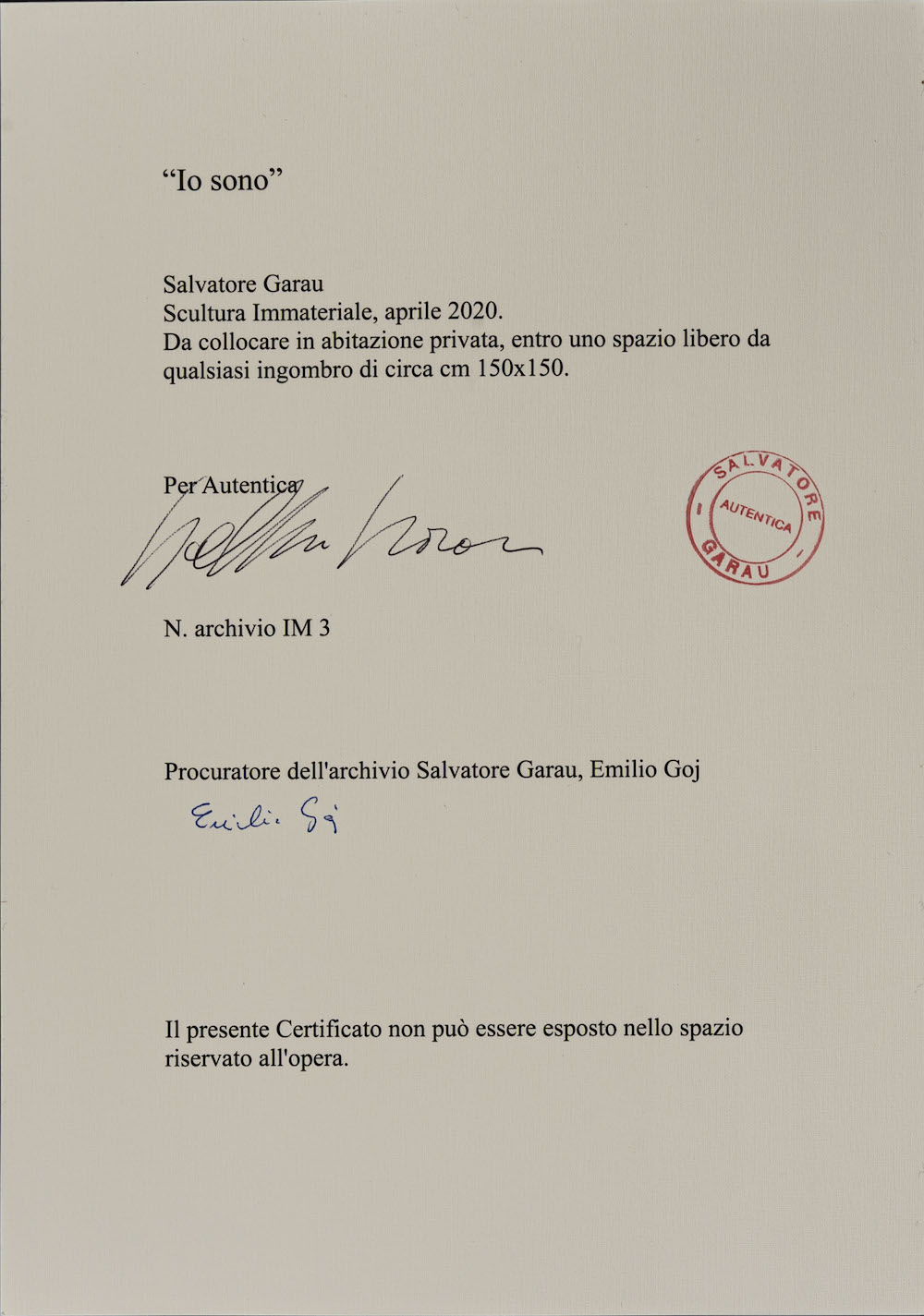 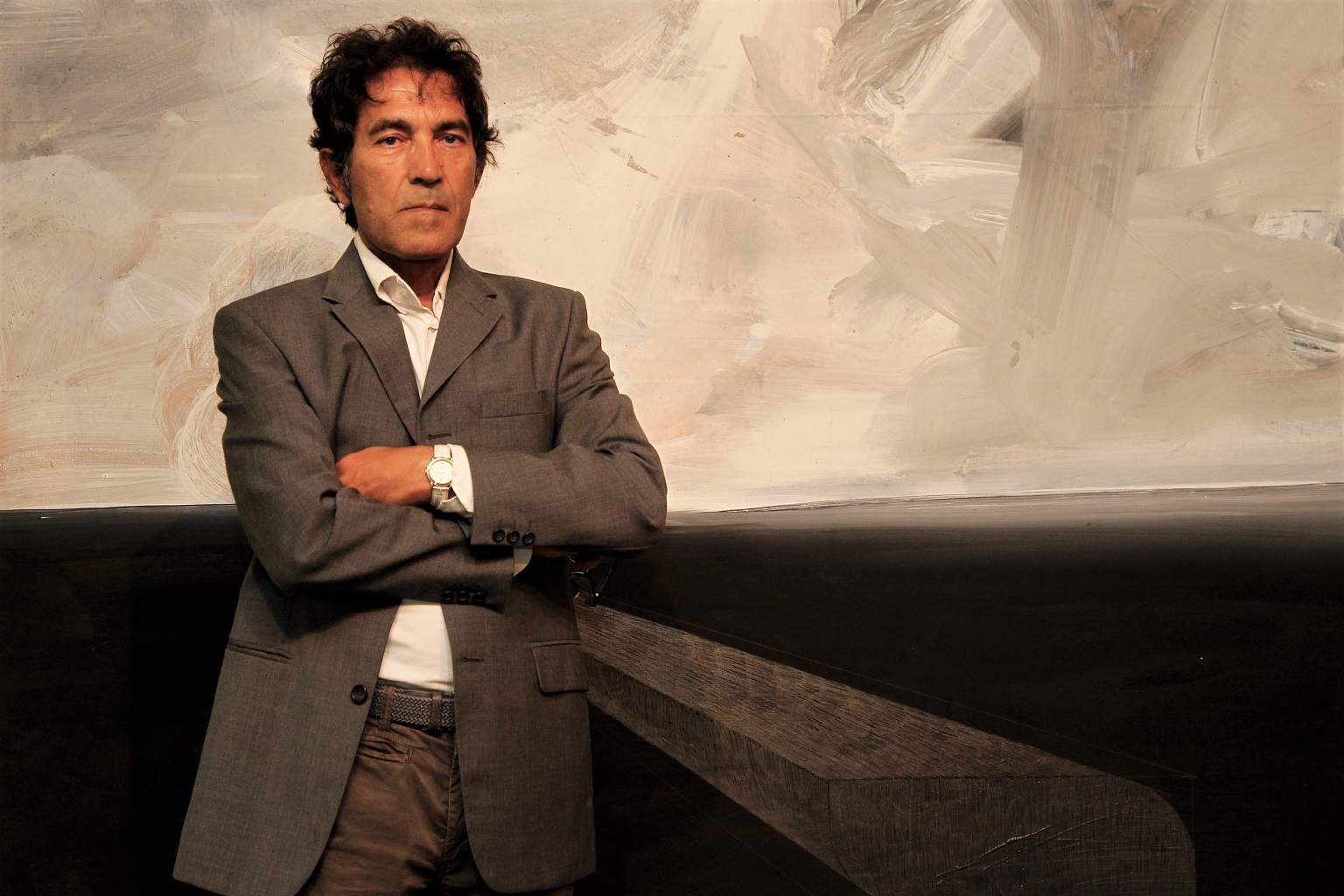